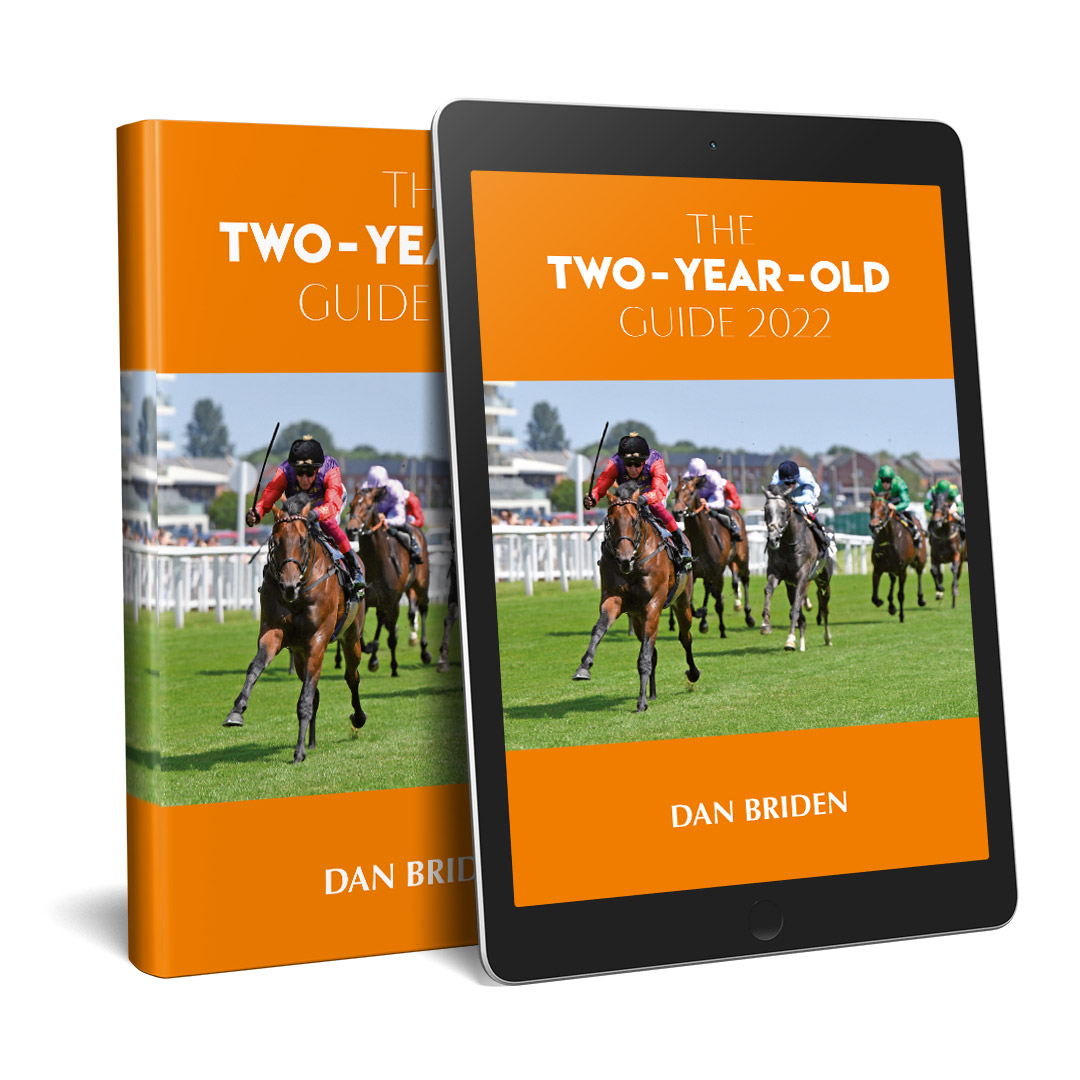 After just two editions – both delivered during the global pandemic – The Two-Year-Old Guide by Dan Briden has unquestionably made a significant impact in the world of racing literature and firmly established itself as the go-to work regarding juvenile talent.

The response from the media, racing insiders and the punting community alike has been consistently positive and we are delighted to be publishing the latest edition for the third successive season.

So, what can you expect? Publication date is scheduled for early May, thus ensuring that the book is ready in ample time for the beginning of the key juvenile races of the campaign, which also ties in well with the run-up to the first major staging post of the two-year-old season in mid-June – Royal Ascot.

The book once again will feature juveniles from a wide and comprehensive stable spectrum, ranging from some relatively new and /or smaller, relatively low-profile yards to the views of handlers at the height of their profession.

Moreover, the publication has hitherto not only highlighted a plethora of juvenile winners in both seasons, but crucially has earmarked a host of late-maturing types expected to flourish during their three-year-old careers.

In other words, the value of Dan’s work extends well beyond simply the two-year-old campaign and has proved to be both a relevant and valuable source of information into the three-year-old career of many entries.

And here is just a flavour of the sort of information contained in the 2021 edition which demonstrates the short, medium and long-term value of the publication:

“Another of our sharper two-year-olds. There is some stamina in his pedigree, but the sire has imported plenty of speed and precocity.”

Berkshire Shadow was certainly sharp and precocious and landed the leading two-year-old race at Royal Ascot at 11/1, before being beaten under a length in the Group 2 Vintage Stakes at Goodwood, ending the season with a commendable fourth in the top juvenile race of the season, the Dewhurst Stakes.

“A nice, athletic son of one of the more interesting first-season sires……… He does it all very nicely….We like him.”

The Balding team had every reason to like Harrow as he landed a hat-trick in August/September (2/1, 6/1, 3/1) including a £200.000 stakes race at the St Leger meeting. He has trained on as a three-year-old, coming home runner-up on both starts in March.

“This is a sweet, very straightforward filly who is going to get better in time.”

Mise En Scene landed her first two starts as a juvenile at 5/2 and 7/1 and was thought good enough to be sent to the Breeders’ Cup at the end of the season. It will be interesting to see how she progresses at three.

“This colt is a strong individual…..and is one we are particularly looking forward to.”

Amazonian Dream was runner-up on his first two starts, including when second to subsequent Coventry Stakes winner, Berkshire Shadow. He came good towards the end of his juvenile campaign with wins at Newbury (13/2) and Sandown (5/2). He has been gelded prior to his three-year-old season.

“A gorgeous big colt who is still growing at present. He could well be in action before the turn of the summer.”

A son of Frankel, Triple Time made his debut at Leicester in June, finishing third of 12. As he developed physically, so did his season and his remaining three outings delivered a runner-up effort at Haydock before going back to the same track to land two 1m contests, including victory in Listed company. He is clearly well regarded as he still holds an entry in the 2000 Guineas.

“An athletic colt who has a super temperament and is coming along really nicely. I wouldn’t anticipate running him over anything less than 7f and it’s likely he’ll start at 1m though that’s still to be determined.”

Hilts had three runs as a two-year-old – all over 7f – showing some promise to earn a feasible handicap mark of 63. Subsequently gelded and obviously handled with his three-year-old career in mind, he reappeared at Redcar last month, stepped up noticeably in trip to 1m2f. Backed into 2/1 market leader, he landed the odds with a strong, late thrust and should remain competitive off his new 6lb higher mark.

You can buy this year’s edition here