Why England can challenge Euros 2020

I have been thinking for the last couple of weeks. France have the squad on paper but I think both Portugal and England have more balance within their squads with stronger leaders.

As an England fan, I really would love and hope that England can win the EUROS 2020(21) but as you may have read in an earlier article I have previously selected Portugal. I am not sure if it is an emotional pull but I find myself struggling to separate the three sides.

If you look at the group stage I predicted England and Portugal will face each other in the first knock out round. I back England to beat that Portugal team but if they don’t we of course stay on side with Portugal.

I think Portugal and France are the two teams who have squads capable to win the tournament and will be good to watch. However, I really believe this England squad is well balanced and has the perfect blend of youth and experience to go deep into the tournament and end their trophy drought.

Looking at my predicted results today I have to say that England potentially have a really tough run to the final.

Whether it be a back-four or three, it doesn’t really matter. England have quality creative players from wing-back and midfield, it just depends on what Southgate thinks will suit his side more. Alexander-Arnold, Trippier, Shaw and Chilwell all offer consistently good delivery from out wide, all being good finishers and being solid enough defensively. In the attacking-midfield area, you’ve got Mason Mount, Jack Grealish and Phil Foden, all technically gifted players capable of playing in a few positions.

I personally prefer the 3-4-2-1 formation, with two sort of no.10s/inside-forwards. I don’t trust any other centre-back other than Harry Maguire, so wouldn’t be totally confident in a back-four. I think a back three of Maguire, Stones and Walker, like in the 2018 World Cup would work really well. Reece James and Luke Shaw can also fill in if Kyle Walker gets injured and you’ve obviously got Conor Coady and Tyrone Mings. Shaw and Trippier would be my wing-backs. I understand how good Trent Alexander-Arnold is, but I personally prefer Trippier on the ball and he has more tournament experience than Alexander-Arnold. Luke Shaw is very solid defensively and is a real threat going forwards with his crossing and link-up play; him and Marcus Rashford have linked up well this season at Manchester United and I hope they can do it this summer for England. Ben Chilwell is a brilliant back-up option.

I’d play Rice and Philips as the two central midfielders. They’re both good on the ball, solid defensively and offer cover if one of the centre-backs strides forwards, normally Maguire or Walker. I think Philips is really underrated and I believe his progressive passing wouldn’t make it a boring and static midfield pairing, something I know people are concerned about.

My front three is Marcus Rashford, Harry Kane and Phil Foden. I don’t think Sterling has performed this season to the level he needs to warrant a starting spot, I personally would’ve taken Jesse Lingard over him in the first place. Jadon Sancho is a fantastic wide-player and one who could earn a starting spot. I think Phil Foden has incredible ability and talent and is so different to the other England players with his link-up play, balance and touch, Jack Grealish being the only one who comes close to him. Marcus Rashford performs best for Manchester United when Luke Shaw gets forward and he can operate as an inside-forward, on the left-hand side. He also has qualities similar to those of Son Heung-min. A willingness to run in behind and a good finish when he gets the chance to shoot. I think Harry Kane is the first name on the team sheet for England. His link-up and hold-up play is world-class along with his vision and ability to score from anywhere on the pitch with either foot and his head. A leader and the England captain who I think will thrive for having inside players to link up with and quality delivery from the wing-backs.

In my opinion, the squad depth is also the best in the tournament. Just look at the possible line-ups below.

The squad have players who can come into the team for different scenarios. If you need a creative spark in the midfield pivot you could play Mount next to Rice rather than Philips. If you need a driving force in midfield with quality, you can turn to Jordan Henderson or the extremely talented Jude Bellingham. You’ve got more defensive full-backs in Walker and James when compared to the more offensive Trippier and Alexander-Arnold. The personnel within the squad could play pretty much any formation making them unpredictable throughout the tournament.

I’m really looking forwards to watching England this summer and hope they can perform and bring it home.

Please see below for my possible line-ups: 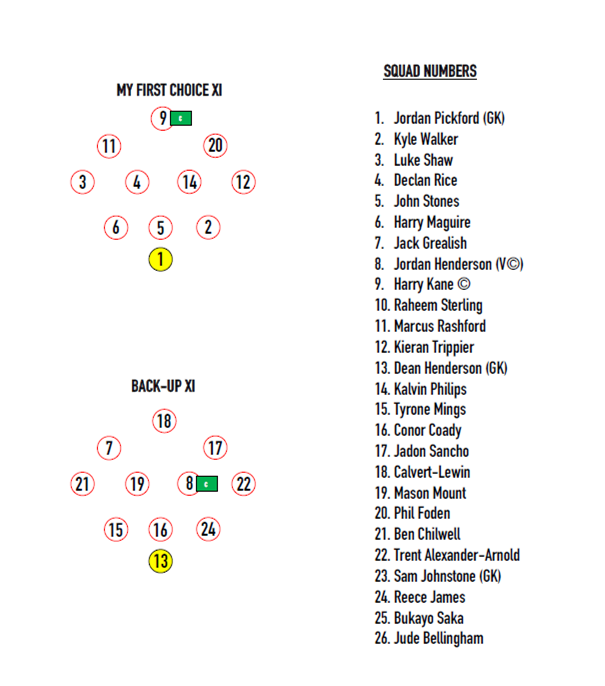