I am always keen to read about new ideas to make racing more transparent.

I love working in this industry but do have to stick up for us every so often. I speak to a large number of people and I am saddened to say we’ve lost a fair few clients due to concerns about how the industry is run. I won’t even start on the problems with people trying to get their bets on…

I was interested to read about the initiative to reduce non-runners and today as part of this 13 trainers have lost the right to self-certify for 12 months. 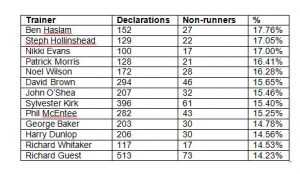 The BHA believe that the recommendations following industry consultation and review are having a positive effect as the non-runner rate has reduced by 14% on a like by like month basis for the first three months of the year. For your interest, the total non-runners for January to March 2018 was 989 compared to 1244 for the same months in 2017.

In August 2017 all trainers were told they had until 1 April 2018 to ensure their non-runner rates were within certain limits. The threshold is 14% Flat and 12% over Jumps (this will reduce to 10% from the end of June).

It should be noted that non-runners between 27 February and 6 March were discounted due to the bitter cold weather and snow we had here in the UK.

“It is essential that we take these steps to reduce the number of non-runners. They are not good for our sport, its fans or its participants.

“All of the bodies who took part in the recent review agreed that we should do this by targeting those trainers who are consistently generating a high rate of non-runners, rather than putting in place measures that unfairly affect or restrict those trainers who operate within the spirit of the rules.

“What the data has shown is that the vast majority of trainers are able to operate well beneath the thresholds without any issue.

“We accept there are a number of unavoidable and valid reasons for horses not being able to run but it is very pleasing to see the non-runner rate within both codes has fallen so far this year. Of course the welfare of horses must continue to come first and we fully expect that, if a horse is not fit to run, the affected trainers would withdraw it via a vet’s certificate with no penalty.”

Thank you for reading!