Time to apply logic to the daily task

Another Carnaby seller has come and gone and it takes a while to get back into any sort of groove. This is a strange thing to admit, I suppose, because the race itself is hardly likely to linger in anyone’s memory, but it was the 23rd in the sequence and you can have some 100/30 about there being 23 more. Let’s be honest, it’s the main thing I do these days so it’s bound to seem a long time until the next one.

I had no strong thoughts about the likely outcome, though I was surprised that Knockabout Queen was able to win so comfortably after finishing fourth at Wolverhampton just two days earlier. But then, Tony Carroll is in magnificent form, especially at Brighton, and even I cottoned on to the fact in time to have a decent bet on Wiley Post in the last. When I presented him with the rock and champagne following Knockabout Queen’s victory I said his career as a jumps jockey  – there were several nice touches for trainer David Wintle, sometimes involving some very interesting Bristol ‘faces’  –  he said Wintle taught him everything he knows. I think that may well be true but he has rather more ammunition than his mentor and is brilliant at teaming certain horses with talented apprentices.

When you think about it, he was instrumental in getting the careers of Sophie Ralston and Poppy Bridgwater up and running and Elisha Whittington is outstanding value for her 7lb claim this season. The last trainer I can recall operating like this and winning a lot of races into the bargain (I’m not going back as far as Richmond Sturdy and J Reid (7)) was Milton Bradley but he hasn’t had a team of Class 5 and Class 6 sprint handicappers  –  lethal at Bath  –  for many years now.

We came home via Goodwood and I flirted briefly with the idea of an old-style bet in the closing novices’ event. Martyn Meade’s Cadre Du Noir cost a lot of money and has not been without his problems. He managed to win last time but this was a longer trip and he was conceding Simon Crisford’s Cape Cavalli 7lb. Normally I’d by-pass Ffos Las form when it comes to Goodwood but Cape Cavalli was beaten by Monica Sheriff, who’d followed up at Newcastle. There is some truly dreadful value around and Cadre Du Noir was terribly short at evens. He now looks very expensive indeed after failing to match Look Closely and Cape Cavalli, who obliged at 5/2. It was a modest affair.

Anyway, I watched it all happen without making a call. I was probably a bit biased anyway, having followed Monica Sheriff the owner when she had top-class horses, Sharpo among them, with Jeremy Tree. If you start betting in hundreds again there’s no telling where it will end and I know plenty about these things so I drove home happy enough, if rather tired.

One of the good things about Radio Three, my station of choice, is the concise news coverage. I never listen to anything else now, thereby avoiding as much Boris Johnson coverage as possible. The thing that staggers me, at an age when I should be surprised by nothing at all, is the number of people who seem taken in by this self-obsessed charlatan. I assume his demise will be swift and I have the champagne ready, though my old Logic teacher ‘Basher’ Barnett quietly insisted that aching desire often fails to bring things any closer.

He was a good man, nicknamed Basher because he never hurt a fly. Some things stay with you for ever. ‘All men are mortal. Brutus is a man. Ergo, Brutus is mortal’. Quite so. The classic syllogism, two statements leading to a logical conclusion. I said I thought that if everyone applied these simple rules they’d make fewer silly mistakes and Basher agreed, though we both thought the Wokingham might require more detailed analysis.

I was enjoying my Sunday morning bike ride many, many years ago and there was a large crowd outside St Luke’s in Southampton. (This was before Tesco became the new church.) Basher was there and he espied me. “Ah, good morning, Carnaby. Faith is a remarkable thing, a truly wonderful thing, is it not?” I hadn’t thought about it all that much but I readily agreed, after which there was quite a long pause. “But it’s not the same as PROOF, is it?”

I went for a protracted lunch with four old wine trade mates on Thursday. We’ve all had bits added or taken away and at one point the other Ian suggested it must have been odds against all of us making 70. I suppose that’s true. My wife, not truly au fait with ‘odds against’ but well acquainted with this bibulous quartet, said it was an outright miracle.

Oh well, happy days. It’s seven days since the lads held United at bay with ten men and it’ll soon be only 51 weeks to the next Carnaby seller. You’ll be wanting better than 100/30 about that other thing, though… 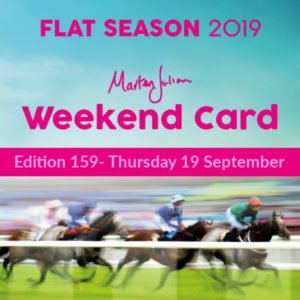 For a free information pack and past copy contact Rebecca Julian-Dixon by phone 01539 741 007 or email rebecca@martenjulian.com