I hope you are enjoying this summer’s racing programme.

Last season we had to work amidst such uncertainty that it wasn’t possible to do full justice to the quality of information I had for unraced two-year-olds.

Nonetheless we managed to produce an abridged Autumn Update, which included my news and write-ups on just 16 unraced two-year-olds.

Despite the relatively small number of juveniles a level stake on each horse every time it ran would have resulted in a 56% profit.

Thankfully this season we are back to normality and I am already receiving news and information for a sufficient number of two-year-olds to warrant publication.

However, rather than put them in a booklet form I have decided to release them, starting tomorrow in the forthcoming issues of the Weekend Card. This means as more news comes through, as it will on weekly basis, I will be able to update the list with both new names and results.

It is hard to quantify numbers at this stage, but I expect new names to be included in the next four issues of the Card, possibly more. This also means that I can cover any entries they may be given, so we should not miss out if they run in the few days following their mention.

Entries will be covered for all the horses, both for the current week and those that were included in earlier issues, so we should not miss anything.

I am hopeful that this new feature will stimulate interest in what is traditionally quite a low-key month in the racing calendar.

P.s A note from Rebecca: Due to the volume of information the write ups on each horse only feature in the edition they feature. Their entries will be mentioned in future editions but not Marten’s notes. If you would like a full collection please buy each edition starting with Edition 243 (11 August). If you do miss one they can be ordered from the office as a back copy for £7 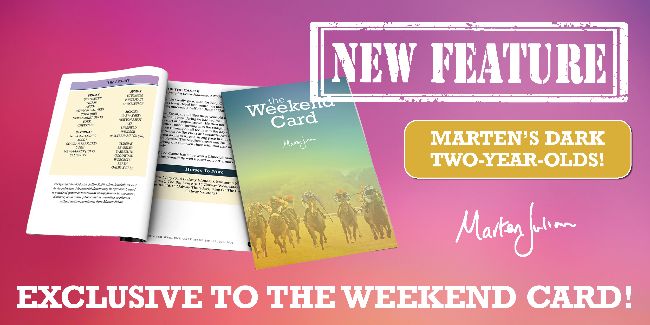