I’ve already written about how I think the England v Germany game will pan out, in my Round of 16 article. In short, I think it will be a close game, but I fancy England to do some serious damage to the Germans on the counter-attack and I predict a 2-0 win for the three lions. But in this article I’ll be sharing my preferred personnel and system with and without the ball.

I believe England should play a 4-3-3 system. The 4-3-3 offers defensive solidity in and out of possession.

How I think England should play with and without the ball:

Defensively, England need a solid backline happy to come out and engage with Germany’s two no.10 players knowing they have the cover of their teammates out wide and midfield. A back-four of Luke Shaw, Harry Maguire, John Stones and Kyle Walker almost picks itself in this kind of game. Maguire and Stones are a solid centre-back partnership, the only potential issue being pace from a run in behind, most likely from Gosens, Kimmich, Serge Gnarby or Kai Havertz. But with three midfielders protecting them, along with the full-backs and backtracking wingers, they should only have to worry about Serge Gnarby, who doesn’t function as a traditional no.9 anyway. This means the two centre-backs will just need to keep their concentration in this one. Shaw and Walker offer a great balance. Both solid in one-one defensive duels and have attributes perfect for this game. Shaw is a real attacking threat from the left-hand side with his pace, desire, crossing ability and link-up play. Kyle Walker can stay back when attacking and play as a half-back. He doesn’t offer a lot going forwards, so it makes more sense to play him in this more defensive role when England are in possession, because of his recovery pace if the Germans counterattack.

I’ve opted for the 4-3-3 system because of the midfield area of this game. It will help England against a superior German midfield. Germany will have more possession with Kroos and Gundogan in central midfield, players like Kimmich at right-wing back and technical players in the final-third, like Havertz, Gnarby and Muller. England can’t compete with that, but they can definitely outwork them. A midfield three of Rice sitting with Mount and Philips box-to-box is perfect for this. All three, especially Rice and Philips, are defensively sound and want to win the ball back. Depending on the flow of the game, they can engage and press quicker, or sit off and read passing lanes. In possession I’d have Rice stay back front of Maguire, Stones and Walker, forming a diamond base when England have the ball. Rice staying back will allow two things. It means Maguire and Walker can play as half-backs and join in the attack, causing overloads out wide and in midfield. It also means Mount and Philips can join the attack without worrying about the potential German counterattack. Mount and Philips are both capable of finding a killer pass to split a defence and link-up play between the attack. So it would be beneficial for England to have both of them in the box-to-box no.8 roles.  All three of those central midfielders are good on the ball and work hard, the perfect blend for this kind of game.

For the front-three I’ve gone for Jack Grealish on the left, Raheem Sterling on the right and Harry Kane down the middle. Picking the wide-men is tough when you look at the options England have. Phil Foden, Jadon Sancho and Marcus Rashford are brilliant options and Bukayo Saka impressed against Czech Republic. But I like the attributes and balance of my preferred front-three. Grealish likes to link-up play and wins a lot of set-pieces. I think Luke Shaw would benefit from having Grealish on the left drifting in and creating space for Shaw to operate in. Sterling makes runs in behind and will push back the German’s left-wing-back, Gosens. And if the front three isn’t working, there’s a lot of quality at Gareth Southgate’s disposal.

Without the ball England should, and probably will, play the 4-3-3. The wingers will track the runs of the German wing-backs meaning the England full-backs and central midfielders can deal with Kroos and Gundogan, along with the two no.10s.

With the ball I’d like to see Rice stay in front of Harry Maguire, John Stones and the half-back positioned Kyle Walker. Rice staying back forms a diamond shape at the base when England attack. This also means, as I’ve mentioned, Harry Maguire, Kyle Walker and occasionally John Stones can create overloads in the final-third. I’d then have Luke Shaw and Raheem Sterling hold their width and stretch the German’s back-five. Doing this will create space in the attacking midfield areas for Jack Grealish, Mason Mount and Kalvin Philips to operate in. This will get more support to Harry Kane, who has been isolated in the last three games. When the ball goes out wide, the wide player on the other side must get into the box along with two of the central midfielders to put pressure on the three German’s centre-backs.

I believe if England approached the game in this manner with and without the ball, they can beat this Germany side. It will be a close game with chances at both ends, but I think England can edge it.

Below are some graphics I have collated: 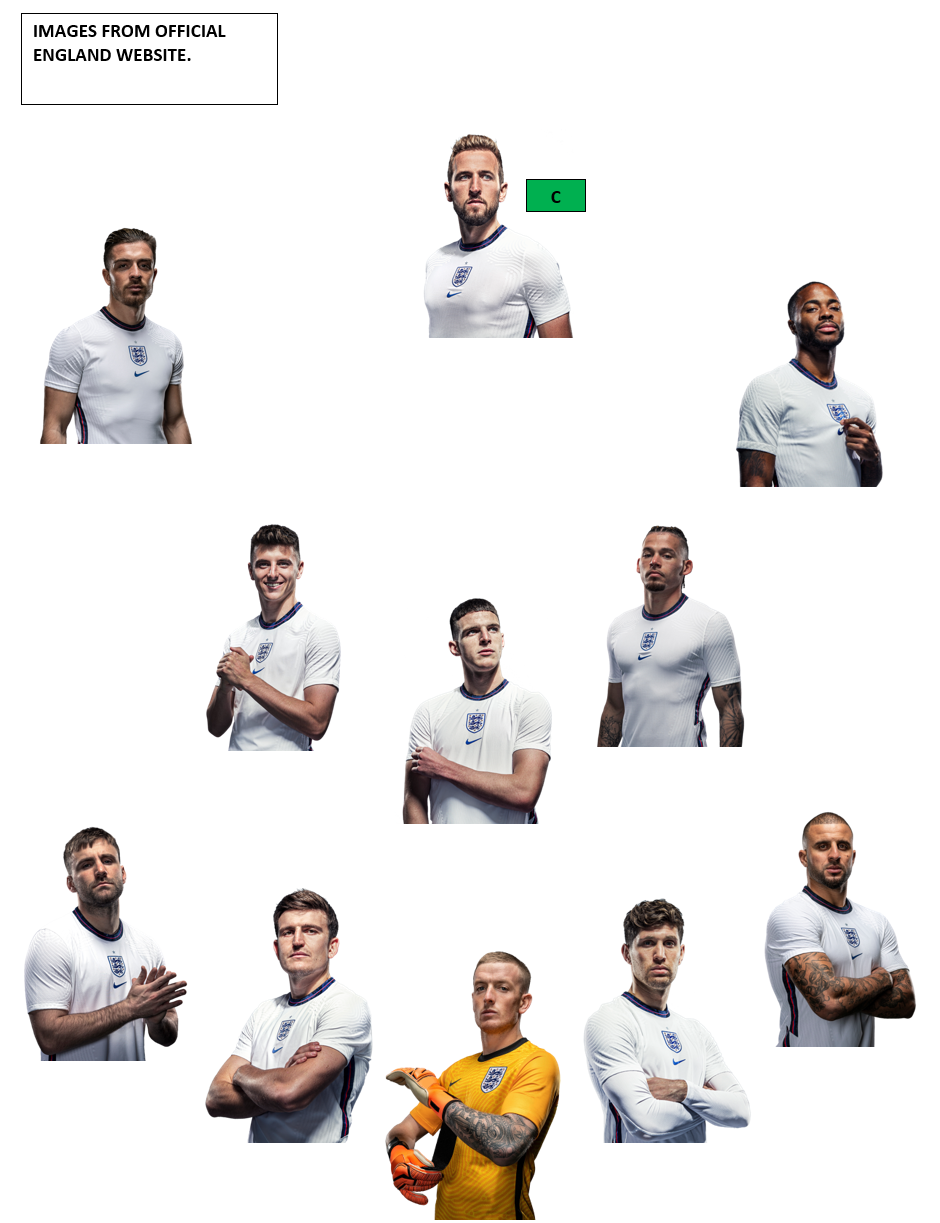 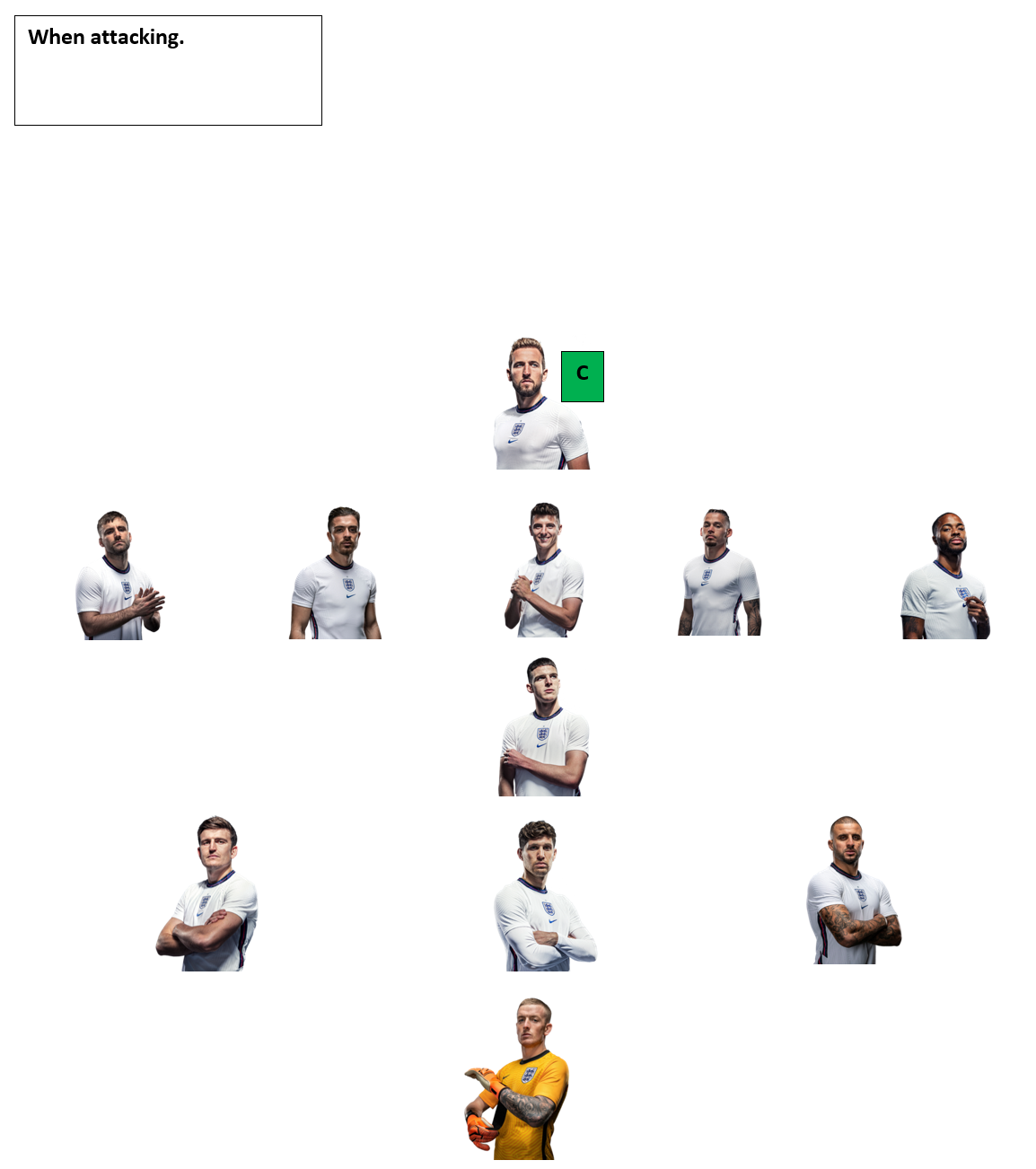