Underrated players. It’s tough to decide whether a player is underrated, or whether they do get the credit they deserve. In this article, I’ll be picking a starting XI consisting of the players, who in my view, aren’t talked about enough or get the credit they deserve. This team is based mostly on last season and is based around the Premier League.

A player who gets talked about as a good keeper, but people don’t realise how good he is. Emiliano Martinez is a top goalkeeper, one of the best in the Premier League. His handling is brilliant, distribution is good and always looks assured. He’s vocal and organises his defence well. He kept 15 clean sheets in the Premier League last season, a club record for the villans. A top keeper and a top signing from Aston Villa.

What a player and what a season he’s had. Luke Shaw has been brilliant this season and, in my opinion, has been one of the best players in the world over the last 12 months or so. He has a brilliant football brain, fantastic vision and has incredible composure on the ball. He’s solid defensively and can get up and down the left flank with ease thanks to his incredible stamina, work rate and pace. His crossing and link-up play make him a real threat in the final third for Manchester United. I know he’s got a lot more credit of late, but I still think he’s underrated on a wider scale and isn’t talked about as one of the best players in the world, which I think he is.

A real recovery of a season from Harry Maguire. After incidents involving a trip to Mykonos in Greece, the first couple of months of the campaign weren’t his finest. He looked as though his confidence had hit rock bottom and he wasn’t dealing with defensive situations how he normally would have done.  He seemed indecisive and looked like he wanted to be anywhere else other than the football pitch. Of course, this may not be true if you ask Maguire himself, that’s just how it seemed to me. But he’s responded brilliantly. A brilliant performance in a 3-1 win against Everton away from home in early November of last year seemed to be a turning point for him. Since then he’s been very consistent, has looked assured and began to show fans and critics the real Harry Maguire. He now looks to have settled into his position as a Manchester United Captain and England regular and deserves a lot of credit for how he’s turned his season around. People don’t give Maguire the credit he deserves and I genuinely think he’s up there with the best centre-back in the world.

A fantastic season for young English defender Ezri Konsa. Everyone praises his centre-back partner Tyrone Mings who has made the England squad, but I’d actually argue Konsa has been more impressive out of the two. He had to adapt to the Premier League in his first season and improved as the campaign went on, playing a big part in Aston Villa’s survival. But this season when I’ve watched him, he looks like a top player. He’s quick, reads the game well, is good on the ball and likes a tackle. I understand why Tyrone Mings got the England call-up. He’s a left-footed centre-back, something England don’t have many of, he’s good in the air and good on the ball. Credit to Mings for getting the call-up as he to has had a great season. But Ezri Konsa has been superb and surely isn’t far away from his first call-up to Gareth Southgate’s side.

What a signing. West-Ham have been brilliant in the transfer market of late signing the likes of Jesse Lingard on loan from Manchester United and the impressive Tomas Soucek for only £19,000,000 Slavia Prague. But the signing of 28-year-old right-back Vladimir Coufal for only £5.4 million pounds, like Soucek signed from Slavia Prague, now looks like an absolute bargain. He’s got a good engine and gets up and down the Hammer’s right flank throughout the game, never seeming to tire. He has a decent cross on him when he gets forwards and is comfortable on the ball. His defending one-on-one is superb and he possesses a great work ethic. Not the most glamorous footballer, but a fantastic right-back and would be in my team of the season, let alone underrated XI.

Such an underrated player. Kalvin Philips is key to how Leeds United play. He’s defensively sound and possesses a great passing range from deep. Like Coufal for West Ham, he never seems to tire and has been a consistent performer in an entertaining Leeds side. Because of how expansive Leeds are as a team, Philips can get exposed a lot but just gets on with it. A fantastic player who I hope can continue his impressive form into next season to really establish himself as a Premier League and England player.

The next two players I’m going to write about are the most underrated in my opinion out of this whole team. Yves Bissouma is a fantastic talent. Brighton really deserve credit for their recruitment and scouting of late and Yves Bissouma is the perfect example of that. Yes, it’s taken a couple of years for him to establish himself in the Premier League, but this season he’s been superb. He’s physical, aggressive, good on the ball and is a fantastic dribbler with the ball at his feet. He’s got a good long-range pass on him and can drive a team forwards from deep. A really talented player and one I can’t see Brighton holding onto for too much longer.

In my opinion, the most underrated player on this list. I love what Gareth Southgate is doing with this England team and I rarely question him, but I do wonder how there wasn’t a seat on the plane for James Ward-Prowse. Don’t get me wrong, I love the squad we’ve got in the EUROs and like all of our midfielders, but Ward-Prowse offers something different. He can dictate a game’s tempo with his passing and calmness on the ball. He can pass it long, keep it short and is, in my opinion, the best crosser of a ball in the Premier League. His set-piece taking ability is up there with the best in the world and I think England would’ve benefited from having his quality of set-piece delivery at the EUROs. His technique also allows him to constantly score free-kicks, scoring ten in the Premier League. A really good player who will never get the credit he deserves unless he moves to a bigger club, no disrespect intended towards Southampton, that’s just the way it is.

A bit of a throw-back. A left-footed player on the left-side using his pace and dribbling ability to get past defenders before executing the final pass, cross or shot. Pedro Neto is exactly that. He’s quick, skilful and loves to shoot from pretty much anywhere. His dribbling ability and ball control is outstanding and there’s a lot of potential there. Unfortunately, he suffered a serious injury to his patella which has kept him out of action since April. He’s got three caps for his country, Portugal, and had a good chance of making their EUROSs squad prior to the injury. His desire on and off the ball will take him far and I hope he can pick up where he left off when he returns from injury. A real fire-starter of a player.

A really solid debut campaign in the top-flight from Ollie Watkins. I watched him a bit when he was playing for Brentford last season and thought there was a player there, but he’s taken to the Premier League quicker than I think most people expected. 14 goals and 5 assists in 37 Premier League games isn’t bad at all when you consider the pressure he must’ve felt being Villa’s record transfer at the time costing £28 million pounds. He’s an unselfish striker who will work hard for the team and press the life out of the opposition’s backline. He has fantastic movement in and around the box and possesses good strength and pace. A good all-around centre-forward who can improve and possibly find a way to get in that England squad on a consistent basis.

A player who I don’t really think about all too often, but one that when I watch I think, what a player. When I watch Arsenal there are so many things to criticise, but it’s rare that I’d be critical of Bukayo Saka. Regardless of which position he’s asked to play he drives the gunners forwards. His pace and strength are really impressive and he’s an honest footballer. He doesn’t like to go over unless he has to and likes to try and beat the opponent one-on-one with a bit of skill, utilising his fantastic dribbling ability. He’s a fantastic crosser of the ball and has good movement in the final third, often receiving the ball in a small pocket of space, before getting past his marker and running into space. His stats read five goals and three assists, but that’s misleading. He’s been playing in an average, often poor, Arsenal side and has been one of probably two or three players who has stood up and taken responsibility in games. Nothing seems to knock his confidence and he’s a very talented player. If Arsenal don’t sort themselves out any time soon, I think he needs to move for his own benefit. He is, in my opinion, a Champions League quality player. 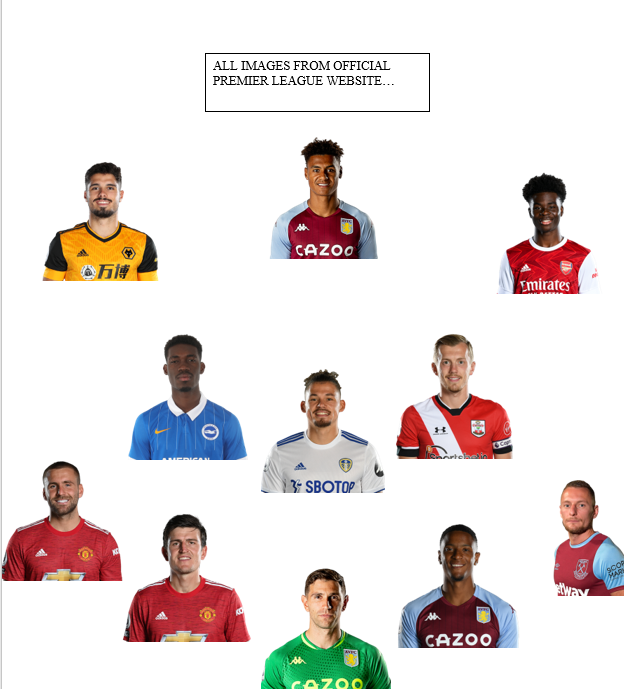