Jadon Sancho: What can he bring to Manchester United?

This is currently being formatted and edited:

The Jadon Sancho transfer saga, surrounding a potential move to Manchester United, is surely one of the longest in football history. In the summer of 2020, he seemed almost certain to become a Manchester United player. Personal terms and agent fees were all reportedly agreed with no complications. The deal ultimately fell through due to the inability to agree a transfer fee with Borussia Dortmund.

This summer has picked up from where we were last summer. Personal terms and agent fees seem to be agreed and Manchester United are seemingly in negotiations with Borussia Dortmund over a potential transfer. With a transfer looking increasingly likely, I’ve looked at what the England wide man could bring to this current Manchester United.

The Englishman has starred in the Bundesliga over the last three years or so. He’s got 20 assists in the last three seasons, whilst also reaching double figures in goals, a very impressive return for a winger. He can operate comfortably on either flank and could probably play as an attacking midfielder or second-striker. He can cross, shoot and pass from pretty much anywhere when in the final-third.  Sancho can do this because of his creative attributes. His dribbling ability and ball-control is something to behold and is up there with the best in the world. He also has incredible vision and veteran-like decision making, knowing when to pass, shoot and how to execute either in any given attacking situation. He possesses good pace and can beat a full-back one-on-one or drive into midfield and be more direct at the opposition’s backline.

So what can Sancho bring to Manchester United?

The team have scored a lot of goals this season, over 100 in all competitions, but there is room for improvement. Manchester United have often played a 4-2-3-1 system this season and have left a lot of the attacking output to the full-backs, three players behind the striker, and the striker himself. Little has come from the midfield double-pivot, although McTominay can chip in with a goal or two, scoring seven this season, his best goal return in a season. So let’s focus on the three supporting players and the striker and class them as the four attackers. This season the forward line has often been Marcus Rashford on the left, Mason Greenwood on the right, Bruno Fernandes as the No.10 and Edinson Cavani as the lone striker. That’s strong on paper but hasn’t always been the most productive of frontlines this season. United have often scored their goals via individual brilliance, where that being a goal itself, a ridiculous world-class pass, or a bit of skill to win a set-piece. Although you can often get away with that and win games by the odd goal or two, it isn’t a guaranteed recipe for success at the highest level.

For much of the season the striker in the team, whether that be Marcus Rashford, Mason Greenwood, Anthony Martial, Odion Ighalo or Edinson Cavani, there has been little service. I believe this down to two simple reasons. Marcus Rashford and Mason Greenwood aren’t natural wingers. They’re not looking to create goals with a killer pass, cross and chip in with the odd goal. They are inside-forwards who’s first thought is to score goals by cutting inside onto their stronger foot. Because of this, the only real creative spark in that final third is coming from Bruno Fernandes. Luke Shaw get’s forward and is a threat from left-back and Scott McTominay or Paul Pogba have offered a box-to-box style from the pivot, but in the attacking areas Fernandes is the one with the creative spark. So what do the opposition do? Man-mark or swamp him. Stop Fernandes, you stop United. This was the case for the majority of the season until United decided to play Paul Pogba in the final third in one of those three supporting positions. It’s at this point the chances for Edinson Cavani began to come and he began to score goals. You didn’t worry if he missed one, because another would come. This is all from having two creative players in the final third instead of one. If you swamp Fernandes, you leave Pogba free. If you swarm Pogba, you leave Fernandes free. This tactical tweak from Solskjaer allowed United to consistently create chances and score plenty of goals towards the end of the season. But you could see the gain of having another creative player in these positions earlier in the season, with Juan Mata occasionally drafted in on the right-hand side. Daniel James was another option and can drive and cross the ball well on either side. He’s always a threat with his pace but needs to improve on his consistency and decision making, sometimes making him counterproductive.

So the inclusion of Paul Pogba really did allow United to express themselves in the final third. The problem was then the midfield-pivot, at times, became static and didn’t offer much going forwards. I think part of that’s down to United’s lack of faith in Fred to perform the sitting role by himself and allow McTominay to get forwards and score goals, something he has shown he can do. But it really does help to have a more creative option both in that midfield-pivot and in the final third.

This is where Jadon Sancho comes in.

Sancho’s ability to score and create chances from both flanks is very impressive and is something United would welcome to the team. I’d play Sancho on the right, where Marcus Rashford has struggled to perform, and give him a free role to create chances and score goals. I’d then play Paul Pogba or Donny van de Beek in the midfield double-pivot to offer a creative outlet from there, starting with either Fred, McTominay or Garner if he stays at United rather than leaving on loan. United would benefit from buying a defensive-midfielder if they deem James Garner not ready. But I really do believe if given the chance by Solskjaer and played on a regular basis in that United team, Garner could occupy that position for years to come and become a star for both club and country.

Sancho also improves United’s squad depth. It probably drops Mason Greenwood to the bench, but they could battle it out and Greenwood’s ability to play in all the front four positions means he’d still start on a regular basis.

Jadon Sancho in that final third creating chances for the striker, taking the load off Fernandes and allowing Rashford, or whoever is on the left-hand side, concentrate on being a goal-scoring inside-forward is something I’d love to see.

Hopefully United can get the deal over the line and we can enjoy watching Sancho terrorise defences in the Premier League.

How I’d line up with Sancho with this squad, and James Garner, next season… 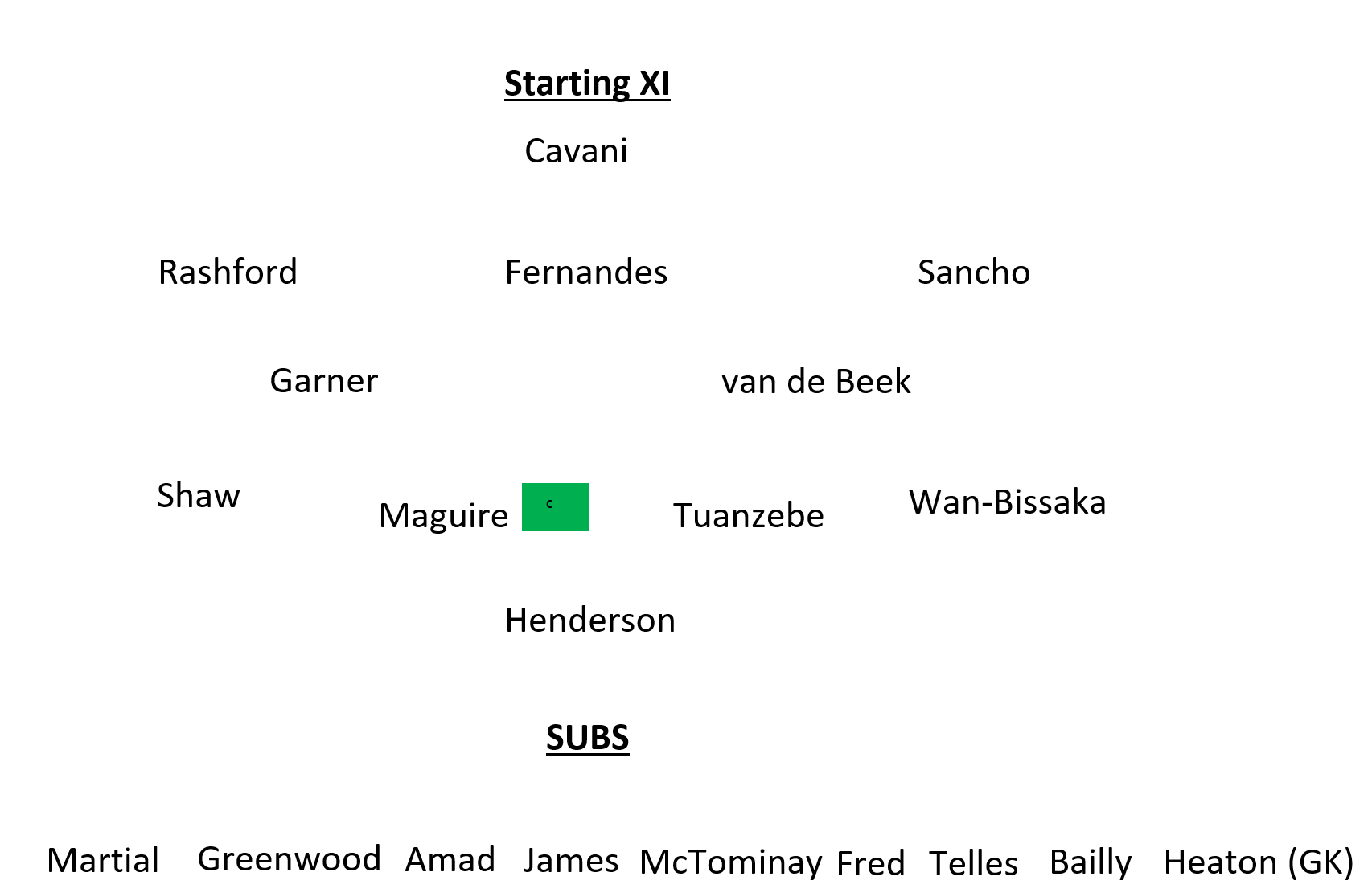