How England should set-up against Denmark: Euros 2020

England face Denmark in a EUROs Semi-Final this Wednesday. I’ve discussed my thoughts on the game in full in my earlier semi-finals Preview article, but I’ll summarise here before going into my thoughts on how England should set-up tactically against Denmark and the personnel I’d go for. I think it will be a close game with an even midfield battle and both teams having solid defences. But the front-three of both sides is where the difference in quality comes in. I can’t see Denmark scoring against England, but I can see England scoring against Denmark. I don’t think it will be another 4-0 hammering which England fans saw last time out against Ukraine. It will be a closer game with a lot on the line, but I think England’s quality in the final-third will be too much for the Danes to handle and I can see the three-lions coming out 2-0 winners.

So now I’ll focus on what I think England should do. I’ll discuss my preferred formation, style of play and personnel, along with a Starting XI graphic towards the end of the article (With and without the ball).

I personally prefer the 4-2-3-1 system normally, with two ball playing sitting midfielders and a no.10. But I think the 4-3-3 will suit England more in this game. Denmark will probably set-up in a 3-4-3 system. They defend well with a solid back-three of Kjaer, Christensen and Vestergaard and have Larsen and Maehle as wing-backs, the latter really impressing in this tournament so far. Delany and Hojbjerg will be the two central midfielders and it will most likely be a front-three of the ever-present Braithwaite, recently scoring Dolberg and impressive Damsgaard. I think England can expose this system and personnel in a few ways, especially by playing a 4-3-3 system. Without the ball it’s quite simple. The back-four of Shaw, Maguire, Stones and Walker is defensively sound, so I don’t see need two sitting midfielders for protection in this game. Rice will sit in front of the back-four and look to intercept passes into Denmark’s forward players before distributing the ball out-wide or into midfield. Mount and Philips will function as the two box-to-box players and be vital in this midfield three for England. Delany and Hojberg are good players, but by outnumbering that midfield two with an energetic and good on the ball midfield three of Rice, Mount and Philips, England can both stop them playing and can cause problems offensively. This midfield three of Rice, Mount and Philips means England can quickly win the ball-back and try and expose the space left by Denmark’s wing-backs out-wide. I’d encourage Sterling and Sancho to press more than track-back. Of course there will be times when they need to do track-back, but keeping them relatively high up the pitch means it will be easier to feed them in those channels when England get the ball and look to attack quickly. Both of them will thrive off this and have the composure to then make the final decision against the Denmark back-three, whether to shoot, pass or cross. These counterattacking opportunities may be limited, but with England’s brilliant passers of the ball, I wouldn’t be surprised to see one of these opportunities taken.

With the ball I’d have England build attacks in a 3-1-5-1. This means Stones and Rice sit with one of Maguire or Walker with them in a back-three and other operating as a half-back. So no matter what England will always have a back-three ready should Denmark win the ball back and counterattack. If Maguire goes forwards, Rice sits in that left channel with Stones central and Walker on the right. If Walker goes forwards, Rice sits in that right channel with Stones central and Maguire on the left. This diamond of defence, shown below, gives England the platform to build attacks.

Then the rest of the players are free to express themselves with plenty of defensive cover. When in possession, England should aim to create overloads in every area of the pitch. Out-wide, Sterling and Shaw can create two v one situations against their wing-back, the same on the other side with Sancho, but he’ll need support out-wide from Philips or Mount, rather than the withdrawn Walker.

If the wide players of Denmark track back to try and stop these overloads out wide, it frees up other England defenders and means they can join in the attack, creating more overloads either in midfield or out wide. Walker could function in a withdrawn half-back kind of role for both his recovery-pace on the counterattack, but also for his short-passing in midfield areas. This, along with Rice sitting back, means Maguire can perform a half-back role on the left-hand side and make runs into midfield and out wide, as explained before.

The final-third will be Shaw wide-left, Sancho wide-right with Mount and Philips operating as box-to-box no.8s. If Sancho feels the need to join in the attack in a more central area, something he quite often does, then one of Walker, Philips or Mount will have to go out onto the right and hold the width, stretching that Denmark back-five. This creates space in the inside-channels for Sterling, Sancho and others to operate in, and creates space centrally in the box for the in-form Harry Kane. If Kane decides to drop into midfield, he can be the one who feeds Sterling and Sancho in those channels. I don’t mind Kane doing this, as long as he gets back in the box for the final cross or pass to help England score a goal. But if he doesn’t, Sterling has shown he can get into those instinctive goal scoring positions throughout this tournament and over the last couple of seasons with both club and country. I’d like to see him making runs in and around the six-yard area when England have the ball in wide-areas. This will also help occupy the Denmark back-three and create unrest and more space for others in the box.

Had one of his nervier England games last time out against Ukraine, but Jordan Pickford definitely has my backing as England’s No.1. In this tournament he’s yet to concede a goal, has looked assured, confident and has shown his brilliant distribution, something that may benefit England on the counterattack against a back-three, who’s wing-backs will leave space in wide areas for Sterling, Sancho and others to run into. Pickford has had a lot of doubters throughout his England and Everton career, but he’s been a lot more assured at this tournament and deserves his place in this Starting XI.

A back-four that pretty much picks itself. Luke Shaw really impressed last time out against Ukraine and is one of the first names on the team-sheet as far as I’m concerned. His link-up play, energy and overall quality make him a first-choice for club and country, a world-class player and, in my opinion, the best in the world in his position. As for the centre-backs it’s another easy decision. Tyrone Mings impressed early on in the competition, but the return of the, in my view, world-class Harry Maguire has meant a return to Gareth Southgate and most people’s preferred centre-back partnership of Harry Maguire and John Stones. They know each other’s game well, are both calm on the ball and good in the air, a solid partnership for England at the back. I’ve then opted for Kyle Walker at right-back. I’m a huge fan of both Reece James and Kieran Trippier, but Walker’s experience, pace and good performances in the last couple of games more than justifies his selection in this Starting XI.

My first choice England midfield, regardless of the system. Declan Rice and Kalvin Philips have been brilliant for England is this tournament so far. Whether it be the pair of them together as a midfield double-pivot, or Rice sitting with Philips in a slightly more advanced no.8 role, the pair has impressed. They’re both defensively sound, good on the ball, have plenty of energy and have shown of late they can handle being on a booking or seeing out a difficult period in a match when not everything is going their way. They play beyond their years and have cemented their place in this Starting XI as far as I’m concerned. As for the other position in this midfield-three, I’ve gone for Mason Mount. I’m a huge fan of Jack Grealish but prefer him playing as either a no.10 or out wide. I think he could operate in a no.8 role, but his impact of the bench has been impressive in this tournament and could be something England could utilise against a tiring Denmark team in the second half. So I’d start with Mason Mount in the other no.8 position. He works hard for the team, is brilliant on the ball and has shown leadership qualities of late. Like Philips and Rice, he plays beyond his years and has a brilliant relationship with the latter, something that can only be of benefit for England. His confidence is also sky-high, coming off the back of a Champions League win with Chelsea, another winner in the team.

An area of the England team that has become easier to pick as the tournament has progressed. For me, both Raheem Sterling and Captain Harry Kane have proven their doubters wrong and are two of the first names on the team sheet. Both have been scoring goals and been picking up great positions in and around the box. Captain Kane now has three goals in two games and is only two goals off the top-scorers in the competition (Patrik Schick and Cristiano Ronaldo with five goals each), with Raheem Sterling on the same amount of goals as his Captain (3). So I’d have Sterling on the left and allow him to have that free licence to pick up goal scoring positions and linking-up with Luke Shaw, something that has worked well in the last couple of games. He also makes space for Luke Shaw out wide when driving infield and taking the full-back with him, another quality which benefits the team. And obviously I’d have Kane down the middle, ready to convert the chances.

Right-wing was a tough pick for me. I really like Bukayo Saka and think his performances in this tournament have been really good of late, but like Grealish I can see him being a brilliant impact-sub. So with the injury doubts over Marcus Rashford and keeping the option of Phil Foden on the bench, again I think he’d be a good impact sub, I’ve gone for Jadon Sancho on the right hand side. I felt he offered balance last time out against Ukraine and enjoyed having that free to roam role on the right-hand side. He swapped sides with Sterling throughout the game and impressed when in possession. His link-up play and dribbling ability is something to behold, and his decision making for a player of his age is impressive. I also think having his future sorted out, in regards to his imminent transfer to Manchester United from Borrusia Dortmund, has relaxed him and means he can now focus on England and the EUROs. I’d also like to add I feel as though Sancho is the kind of player who performs better when starting and likes to get a feel for the game rather than coming off the bench to make an impact. Marcus Rashford, Jack Grealish, Bukayo Saka and Phil Foden will, in my view, all be better options from the bench. This dangerous front-three of Raheem Sterling, Harry Kane and Jadon Sancho is one that I think would cause Denmark problems. 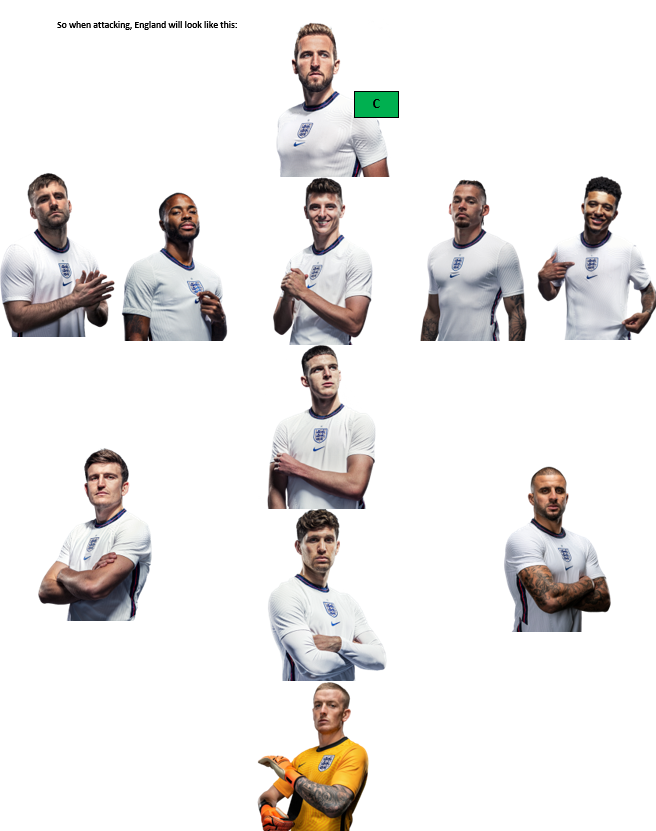 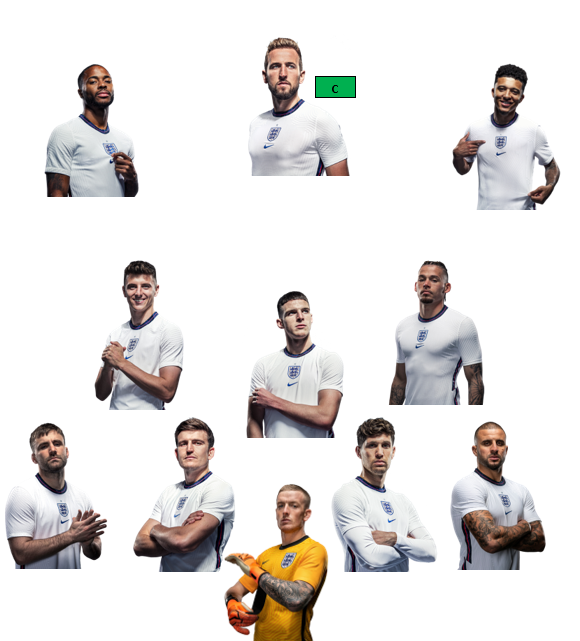