This will be a tough game and one that will be decided by fine margins. A mistake? A moment of genius? Or some luck. I’ve written my thoughts on this game and how I think it will pan out in a previous article titled England V Italy Preview, but to summarise, I think England will edge out the Italians under the Wembley arches 1-0.

In this article I’m going to explain how I’d set up England for this game, with tactics, personnel and formations.

My favourite system, and seemingly Gareth Southgate’s the amount of times he’s picked it during this tournament and in the two friendlies against Austria and Romania. The 4-2-3-1 gives England a solid back-four, defensive cover with a midfield double-pivot who can still play the ball forwards, and four attacking positions with two wingers, a no.10 and striker. It’s a system that works well in and out of possession and allows those front players, along with Luke Shaw, to attack without worrying about a potential counterattack from the Italians.

I’ll go into more detail later in the article but when in possession I’d like England to adopt a 3-2-4-1 system. In simple terms it means Harry Maguire goes to the left of a three with Stones in the middle and Walker slottmaring on the right, with a midfield two of Declan Rice and Kalvin Philips in front of them. This gives England a good platform to attack, will help us play out from the back and through the Italian’s press and means Harry Maguire and Kyle Walker can operate as half-backs and create overloads.

First of all, congratulations to Jordan Pickford on breaking a 55-year-old record and becoming the England goalkeeper to go the longest time without conceding in 725 minutes. Pickford has a fantastic EUROs campaign and has looked confident and assured. Yes, he was slightly erratic against Denmark and the game before that against Ukraine. But he’s still done well, made good saves and marshalls his backline well. Would I like him to settle down for the final? Of course, I would, but in that current England squad I firmly prefer Pickford in goal to the other options. He’s tournament proven, has 37 caps, is a top goalkeeper and knows that England defence inside-out, when to come for crosses and when to stay on his line. Still very much my England No.1 .

An easy choice. I hear people praising Italy’s centre-back partnership of Chiellini and Bonucci, but I think Harry Maguire and John Stones have been just as good, if not slightly better. They’re both composed, good on the ball and stride forwards from the back, encouraging their teammates forwards before playing an incisive pass. As for the full-backs I don’t want to sound to repetitive as I’ve talked about this in previous articles, but Luke Shaw and Kyle Walker pick themselves at this point. Kyle Walker’s recovery pace, ability to see danger, composure, quality on the ball makes him an easy pick and I see no reason to drop him. He’s vital when he drops in that half-back role and helps out Maguire and Stones if there’s a quick forward running in behind, utilising his brilliant recovery pace. As for Luke Shaw he’s a threat going forwards, registering three assists at this tournament and has been solid defensively. In my opinion the best left-back in the world and one of the first names on the team sheet.

Like the back-four, an easy choice. Declan Rice and Kalvin Philips have both been huge contributors to England’s success. They work hard, have great stamina, are good on the ball and read danger well. Jordan Henderson has been good of the bench and his experience will be vital in this final, but I feel as though that could be a great quality from the bench. A midfield partnership I see no reason to disrupt. I’d also like to add, for me, Kalvin Philips has been one of the best players of the tournament.

The only area of the team I needed to really think about. I’ve picked this supporting trio for Harry Kane for a few reasons. I felt Raheem Sterling, despite not scoring, had his best game of the tournament last time out and is in good form, so see no reason to drop him. It’s for the same reasons I’ve opted for Bukayo Saka on the right-wing. The fact he’s left-footed on the right-hand side gives England balance in the final third. He’s quick, dangerous and a throwback of a winger, looking to create rather than score. I also feel as though he can get a lot of joy one on one against Emerson, who’ll most likely be playing left-back for Italy using his trickery, vision and constant runs in behind. For the No.10 role I had to think for a while. I felt both Jack Grealish and Phil Foden made great impacts from the bench last time out against Denmark and they’ll certainly have given Gareth Southgate something to think about. I feel Mason Mount’s energy and against Italy’s holding midfielder Jorginho can cause the Italian’s some problems when both playing out from the back, and building attacks in midfield. Jorginho likes to dictate the tempo of a game, and I think putting Mason Mount on him, almost man-marking him, will stop him conducting from deep. It also means England have proven game changers from the bench with Phil Foden and Jack Grealish.

One of the first names on the team sheet. Harry Kane got a lot of stick after not scoring in any of England’s group-stage games, but in the knockout stages, he’s come alive. The England skipper has netted four goals in three games and is well and truly back on form. He’s getting the chances he wasn’t before and is taking them to great effect. An easy pick.

This is how I think the three lions should play with and without the ball. When in possession, be brave. Italy have a good midfield where their two no.8s, Barella and Verratti, will press you, but I back England’s midfield to play through this. The double-pivot of Rice and Philips has worked brilliantly throughout the tournament in shielding the back four, but also giving England that composure in the middle of the park. Both Rice and Philips are more than capable of playing through the Italian’s press and means England will have more bodies in the defensive area when playing out from the back. Having more passing options in these areas is vital to bypass the Italian’s high-press and get at their back-four.

Having Rice and Philips stay back when building from the back means England have five players to keep the ball and slowly get up the pitch. For example, if Harry Maguire is on the ball, stride forwards, hold onto it, encourage the Italian forwards to press, which will tire them, before passing it to Rice or Stones. Again, the recipient of the pass then strides forwards with the ball. This slowly moves the defensive line-up and will allow England to have good possession, eventually, in the Italian’s half. I’ve mentioned it in so many previous articles, but Kyle Walker and Harry Maguire operating as half-backs and striding into midfield and out wide could really cause the Italians some problems and create overloads. And create 3-2s all over the pitch. If the attacking move breaks down England will have plenty of cover with at least three defenders back at all times, in some cases four or five. So when England attack I’d have Raheem Sterling tuck in slightly, have Luke Shaw wide-left, Saka wide-right and Mason Mount in a free roaming no.10 role with support from the wide-players, two sitting midfielders and half-backs. This means I’d like to see England attack in a 3-2-4-1 system.

When England find themselves in a good passage of play and are having a sustained attack, Kalvin Philips could join Mason Mount in the no.10 areas, or go out wide to the right-hand side to hold the width and stretch Italy’s back-four when Bukayo Saka goes into an inside-forward position. It’s about getting players whether it be Maguire, Walker, Rice or Philips, closer to the front-three and feed the wide players, Raheem Sterling and Bukayo Saka, in those channels between centre-back and full-back, or out wide to Luke Shaw or whoever is holding the width at that moment.

I’d like to see Raheem Sterling and occasionally Bukayo Saka operate into those inside-forward positions and get isolated one-on-one against Chiellini and Bonucci at centre-back and expose their lack of pace and try and tempt them into making a challenge, although they are experienced so it may not be as effective, but the lack of pace should certainly get looked at by the England coaches. You could try and get Sterling and Saka running in behind that Italian centre-back partnership and try and get one-on-one against Donnarumma. England has plenty of players who can play a ball over the top. Jordan Pickford, Harry Maguire, Kyle Walker, Kalvin Philips, Mason Mount or Harry Kane if he drops into those deeper positions.

In regards to how Italy could hurt England, it’s tough. They could try and dominate the midfield and get bodies forwards, try and overwhelm and outnumber that England backline. But England have been outstanding defensively throughout this tournament. They defend as a team, limit space in midfield pockets, cut out passing lanes and look to intercept and apply pressure through the striker and no.10, everyone else gets back and defends patiently, waiting for the Italians to make a mistake. Italy will try and protect themselves from the counterattack, but I think Mason Mount can easily evade Jorginho with both a turn of pace and trickery, and I also think England could exploit the space left by the attacking Emerson on left hand side, and get Bukayo Saka running into that space one on one against Chiellini who he could beat with his raw pace, whilst also creating space in the middle for arriving teammates.

Regardless of what happens on Sunday am very proud of this team. I’ve connected with them, can see their dedication and am very optimistic for the future. Go out on Sunday, play your game and enjoy playing football. 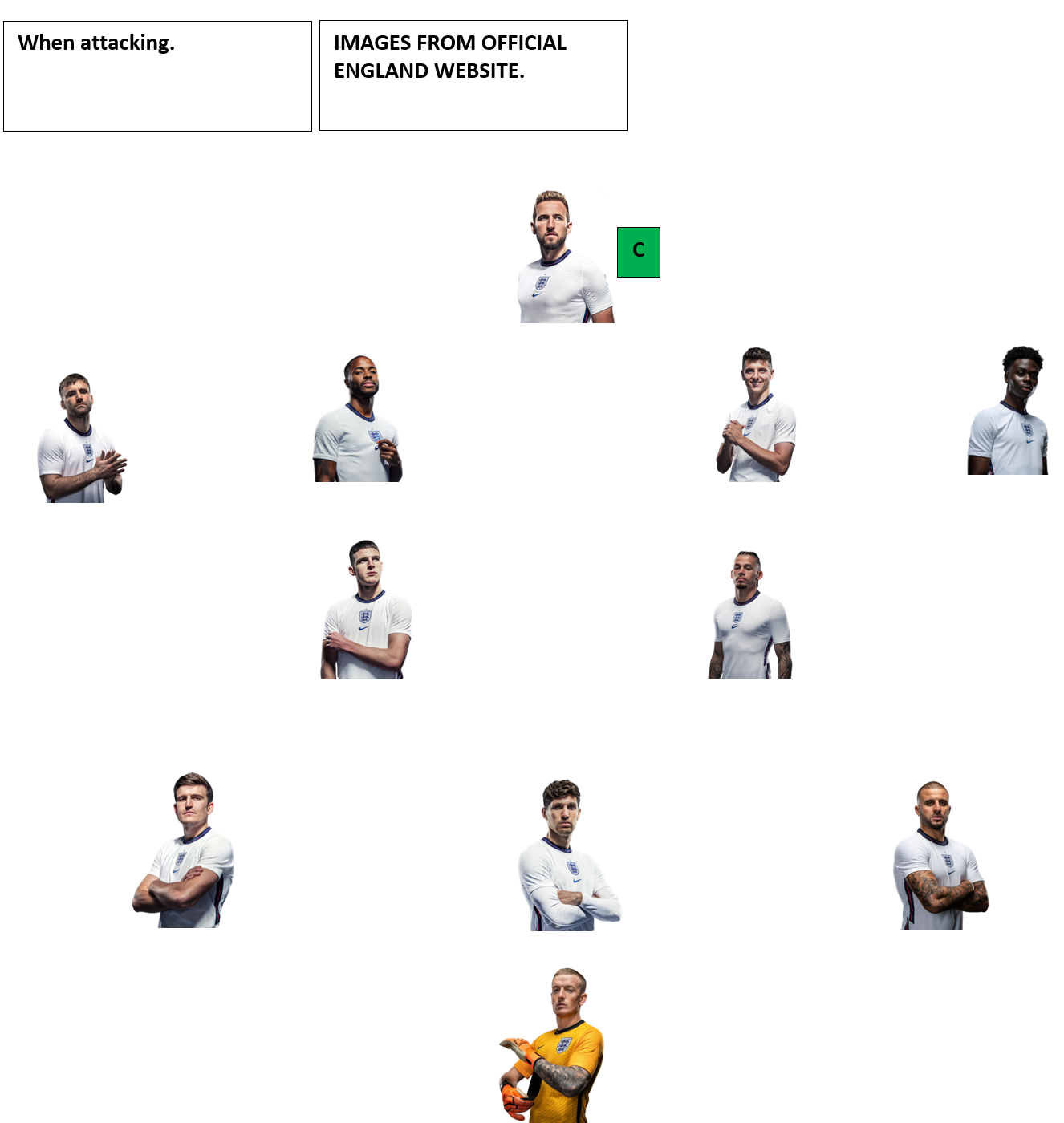 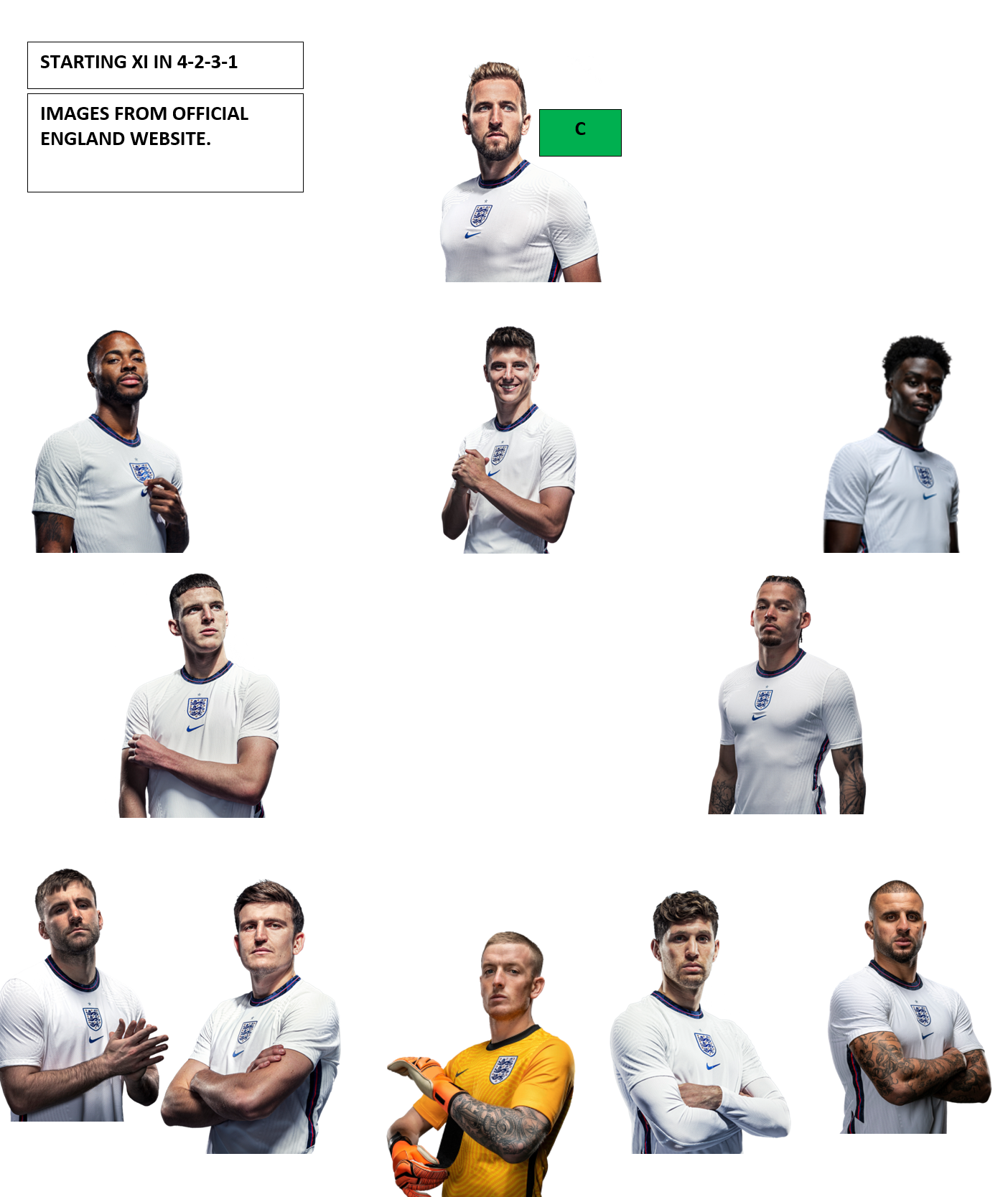