England’s victory over the Germans two nights ago has set-up a quarter-final clash against Ukraine.

This Ukraine side, managed by the legendary Andriy Shevchenko, have no pressure on them whatsoever. They got out of the group stage with only three points, with those points coming against the worst ranked team in the competition, North Macedonia, winning 2-1. They lost 3-2 to the Netherlands, coming back from 2-0 down to draw level, only to concede a late goal from Dumfries, and lost 2-0 to an average Austria team. But despite a predictably underwhelming group stage performance, they’re not here on merit. Ukraine beat a solid Sweden team 2-1 in extra-time to make it to the quarter finals. They scored two great goals and were slightly unlucky with the one they did concede, going in via a deflection. They did concede plenty of clear-cut chances in that game and Sweden will feel they should have won the game in the 90 minutes with the chances they had. If Ukraine give those chances to England’s forwards, especially the in-form Raheem Sterling and off-the-mark Harry Kane, it could be a long night for Shevchenko’s men.

England are the clear favourites for this one, but sometimes that can make a straightforward game become tense.

Ukraine get plenty of bodies behind the ball and defend as a team. They’ll probably adopt a 3-5-2 system and keep things tight and try and keep England out as long as possible. They have three standout players. Right-winger Andriy Yarmolenko is always a threat with his finishing ability in and around the box. Ruslan Malinovskiy in midfield has good vision and can deliver a dangerous set-piece. Zinchenko, is good on the ball, can cross, pass, shoot and is probably Ukraine’s best player, either in midfield or as a left-wing-back, probably the latter in this game.

England are going to have to be patient in this game. They need to not panic or do anything stupid. If England stay calm, keep the ball and wait for their moment, whilst concentrating when Ukraine get forwards, they should win the game comfortably.

I suggest England return to the 4-2-3-1 system in this one. The back-three worked well against the Germans, but seems unnecessary against a sitting-back Ukraine team. I’d sacrifice one of the three centre-backs and bring in an attacking midfielder to occupy that no.10 position, Jack Grealish, to support the front-three and create overloads in wide areas to create space for the full-backs out-wide, midfielders centrally or even if one of centre-backs, likely Harry Maguire comes forwards as a half-back at times down that left-channel. The reason I opted for the 4-2-3-1 over a 4-3-3 is to firstly get a no.10 on the pitch, but also to have two sitting midfielders cut out passes to Ukraine’s front two. When attacking the system could become a 2-2-5-1. This means Harry Maguire, John Stones, Declan Rice and Kalvin Philips sit as a defensive square with the rest of the team attacking with plenty of width and bodies in the final-third. During sustained attacks one of the double-pivot, Rice or Philips, can get forward and drive into potential space on the edge of the box. One of the centre-backs, Harry Maguire or John Stones can also do this in deep midfield areas or out-wide.

I believe with this system along with a patient and possession based game plan will help the three lions advance to Semi-Final clash against one of Denmark or the Czech Republic.

Pickford has had his doubters over the last couple of years, but no one can deny he has never let England down. He’s been brilliant in the tournament so far and was outstanding against the Germans, making two crucial saves to deny both Timo Werner and Kai Havertz whilst the game was still 0-0. He also made it difficult for Thomas Muller to score when through on goal.

I personally think three of this back-four pick themselves. Luke Shaw is, in my view, far better than Ben Chilwell. He’s great going forwards with his link-up play, vision, passing and crossing-ability. His engine and pace means he can be attacking on the left-wing one minute and be back putting in a crucial block against the opposition’s winger the next. Harry Maguire and John Stones are England’s best centre-back partnership, although Tyrone Mings is slightly unlucky as he performed well against both Croatia and Scotland. Right-back is the only position in the back-four I had to think about. Kyle Walker was impressive in the back-three against Germany but offers little going forwards. Kieran Trippier is a fantastic option as a wing-back but is behind Reece James as a standard right-back, in my opinion. So I’ve gone for Reece James in my back four. He’s brilliant defensively, strong on the ball and can put in a great cross. Probably the most all-round right-back England have got.

An easy choice for me. Declan Rice and Kalvin Philips have been a brilliant pairing in midfield so far this tournament and I see no reason to put an end to this successful partnership. Jordan Henderson may benefit from getting a start, or the more expressive Jude Bellingham could play in the pivot. But I just feel as though Rice and Philips give the rest of the team a platform to go and attack, not worrying about leaving the defenders exposed. They both read the game well, are calm on the ball and will only benefit from playing together again.

Like the rest of the team so far, some easy picks for me. Raheem Sterling has been on fire so far in this tournament, netting three goals in four games. His dribbling ability, pace and late runs into the box have been crucial for England so far and I see no reason for him to miss out on this one and he’s a starter for me on the left-hand side. Jack Grealish is my choice at no.10. He changed the game when he came on against Croatia by driving the team forwards and taking responsibility. He wants to be the main man, the player kids in the playground aspire to be like – an idol for the fans. His dribbling ability, vision link-up play and passing make him an easy choice in this position. On the right I’d like to see Bukayo Saka. He was brilliant against the Czech Republic and looked solid against the Germans as well. He’s stronger than people think and can hold off players, cut inside on that left-foot and make something happen. He carries the ball well and always wants to embarrass the full-back, a quality all good wingers have. Playing out-and-out wingers in Sterling and Saka, along with Jack Grealish coming into those areas, will stretch the Ukraine backline and create space for teammates to run into and will help break down the low-block I’m anticipating from Ukraine.

The England captain and a world-class player. No one should ever doubt Harry Kane’s ability or desire to score goals, yet some fans do. However now he’s off the mark he can relax and hopefully get more chances to score goals. His movement will be important against three centre-backs and his link-up play in and around the box may also prove a useful asset, with runs in behind the Ukrainian backline from teammates. One of the first names on the team sheet. 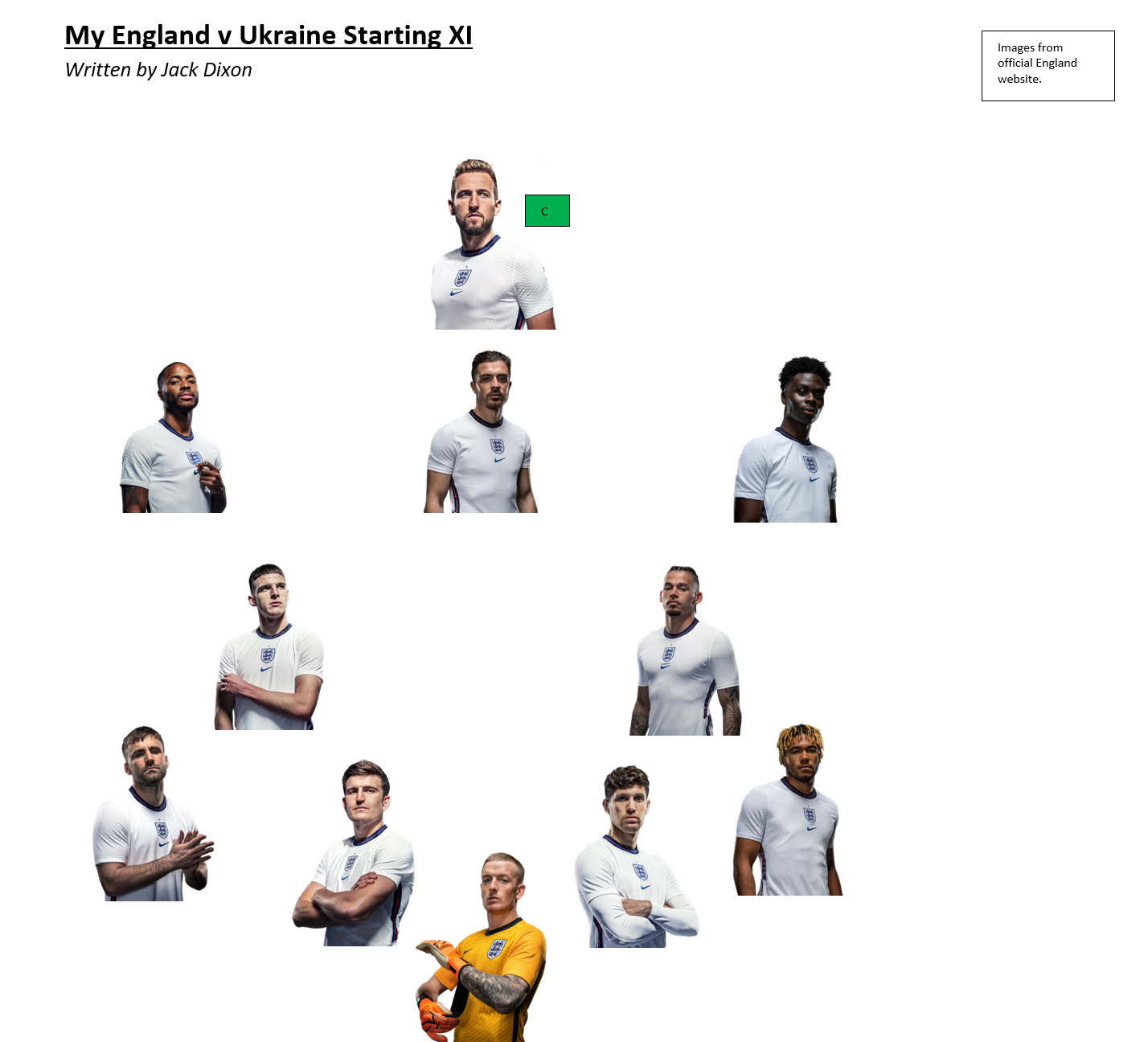