Echoes from a wondrous place

Sixteen Tons, a song made famous by Tennessee Ernie Ford, may have had some resonance with punters, especially the line about being ‘another day older and deeper in debt’. Happily, only the first part applies around here because I’m keeping fairly quiet until Malcolm Saunders unleashes his band of modest sprinters at Bath and Chepstow.

Age brings on a certain mellowness. Let’s pretend for a moment that the evening papers still print the racing results, and you’ve been beaten a short head; you handle it with a sigh, a shrug, maybe even a wry smile. Not for you the non-deleted expletive of the late teenage years. The handicapper has done his job, you can see that now. They were all meant to dead heat and two of them nearly did. It’s just that one of them happens to be yours. Well played, sir, and another wry smile.

Mellow isn’t the same as world-weary, of course. Well, not quite. Tell me you’re world-weary and I know you’re only a step away from saying you’re never surprised by anything these days. I’ve never gone that far. When Southampton turned around a two-goal deficit against Burnley the other day I was indeed surprised. Very, very pleased, nay ecstatic, and suffused with a warm, lingering glow, but most of all surprised.

I’ve always thought you should be spared selections on this page. Such is the torrent of racing on a daily basis I feel you deserve a rest. It’s fair to say I have changed  –  I hesitate to say matured  –  to a degree. Years ago I might have listed my ante-post bets with the strong recommendation that you join in.

That would have been the case in 1973, when I thought Jacinth had merely to turn up to win the 1000 Guineas. She was a brilliant filly and had no difficulty in winning the Coronation Stakes, the Falmouth and the Goodwood Mile. Unfortunately, she found the once-raced Mysterious too good in the Guineas, which was no disgrace because the latter went on to claim the Oaks by four lengths. It wasn’t the sort of thing you could have predicted before the first fillies’ Classic. Jacinth, a five-lengths’ winner of the Cheveley Park, was so good she headed the Free Handicap  –  rare indeed for one of her sex. I still have the Guineas ante-post voucher.

In 1967 I had the Lincoln Handicap entries pinned up on the wall at Cambridge long before the race and was very interested in Waterloo Place, even before Tom Jones let him run in (and win) a novices’ hurdle at Newbury the week before. The ante-post bet had to be topped up, needless to say, but he came up against Frankincense on the big day. I thought the finish was quite a bit closer than Barry Hills suggests in his book but I suppose it was all for the best. Victory for Waterloo Place would have delayed Barry’s glittering career for quite a while, whereas I’d simply have gone down the Turk’s Head for a quiet celebration. Actually, I think I did anyway, though it didn’t open until 6pm in those days.

It’s a while since I sat down to watch the Grand National on television. For several years I hosted the Liverpool Lions’ charity dinner at the Holiday Inn the night before. There were many different   Scouse comedians, my favourite being the fellow who said he was using Viagra eye-drops because he wanted to look hard.

I suppose the very best year was 2003, when I passed on Marten’s tip for Monty’s Pass despite nursing a fancy for Pat Murphy’s Supreme Glory. They were first and second at 16/1 and 40/1 but I don’t burden people with ‘if onlys’. Pat trained no more than two miles from where we lived (and still live) in those days but we’ve rather lost touch now. Funnily enough his namesake, BBC Radio’s Pat Murphy, contacted me recently regarding his upcoming book about Sports Report, the seminal 5pm programme which has lost something since football was rescheduled to suit Sky and games finish very close to five o’clock anyway.

I presented Sport on 2, and therefore Sports Report, a handful of times in the mid-1980s and had a few tales for Pat. But I was only a sort of ‘leg man’ or gopher when making sure the champagne cork could be heard popping as Desmond Lynam interviewed Jenny Pitman after Corbiere’s triumph in 1983. The following year I managed to tip Hallo Dandy on the Radio 4 Today programme and saw his owner Richard Shaw wandering around the concourse the day before the big race. He spent the evening with us (Mike Ingham had taken over from Des as presenter), which made things much more straightforward the following day when Hallo Dandy obliged. In his later years the horse was found alone and distressed in a field, whereupon Richard bought him back and gave him a happy retirement.

I was full time at the BBC for just under four years and the Grand National memories are the most vivid. Nothing could ever match 1982, when the night before the race animal rights protesters set fire to two of the fences, Ken Bates bought Chelsea for £1 and Margaret Thatcher sent the troops to the Falklands. The following day, when Grittar justified 7/1 favouritism, John Oaksey  –  freed from reporting responsibilities at that stage  –  entered the sloping, rickety (some would say dangerous) Heath Robinson-style commentary box on the roof of the old County Stand and danced across Peter Bromley’s line of vision as Grittar and Mr Dick Saunders went clear. The oldest winning amateur rider clearly delighted the noble lord. Or ‘the Noble Lord’ as he became when John McCririck’s penchant for nicknames earned Oaksey’s ‘title’ some capital letters. Bromley was incensed by the dance routine and was going to make his feelings known to Lord Reith, who’d sadly passed on eleven years before, but I managed to calm him down. I was only doing the prices on air and had backed Grittar, so nothing was too much trouble.

I loved Liverpool, the ‘Wondrous Place’ giving Ron Wycherley (a solid enough name until agent and impresario Larry Parnes thought ‘Billy Fury’ had a bit more going for it) one of a string of hits. Wondrous Place is also the title of Paul Du Noyer’s superb book about Merseyside’s musical revolution of the sixties  –  Echo and the Bunnymen, Cilla, the Chants, the Searchers and four other chaps whose name escapes me.

I even came third in a Billy Fury competition in Birkenhead one night  –  I’m still not sure how clerk of the course John Hughes and I made it on to Sport On 4 at Aintree on National morning  –  but there comes a time when bright reality kicks in. I thought I might present the main programme in 1985 (Last Suspect 50/1, Hywel Davies and Captain Tim Forster  –  ‘keep remounting’ etc) but I didn’t and it was time to move on. There’s something a little sad about being a gopher at 36 and I’m not much good at staying safe, either. If you’re a gambler you’re a gambler  –  and it’s not always about money. 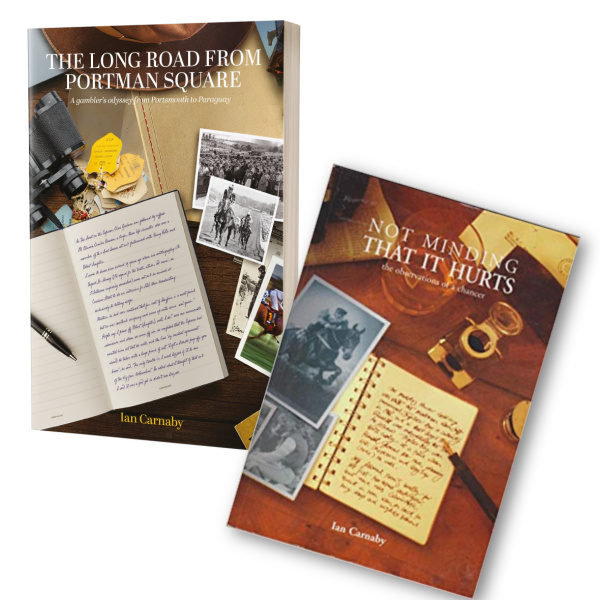