I have been busily employed today writing my feature on the King George VI Chase for the Winter Guide, which will be out the week before Christmas.

It has proved a fairly challenging assignment, if only because running plans for Thistlecrack and, to a lesser extent, Coneygree are so uncertain. I think we can safely assume that Cue Card will run, trying to land the second leg of his £1 million bonus for winning the Betfair Chase, King George and Gold Cup, but Colin Tizzard has a proper dilemma on his hands in trying to resolve this tricky situation.

Obviously he does not want Thistlecrack to stand in the way of Cue Card’s attempt at the bonus, but then if Cue Card were to be beaten in the race he would be rueing Thistlecrack’s absence.

He probably feels, with some justification, that Coneygree is the only horse with a realistic chance of beating either of his horses, and he would have gleaned plenty of encouragement from the Betfair Chase, when Cue Card beat Coneygree by 15 lengths.

The Feltham Chase is the obvious alternative for Thistlecrack at this stage of his career, with a clash with Cue Card looking inevitable at Cheltenham in March.

There is also the distinct possibility that the King George could cut up in size. If the rain doesn’t arrive there must be a chance that the Bradstocks will favour the Lexus Chase for Coneygree. Thistlecrack may run in the novice while it must be unlikely that Douvan will be tried over three miles for the first time at this exalted level.

There are also doubts about the participation of many others including Bristol De Mai, Blaklion, Valseur Lido and Road To Riches.

Colin Tizzard may take the view that Cue Card faces a fairly straightforward task in the absence of Thistlecrack, so he may decide to let him carry the flag alone.

It’s not an easy decision, but if I were in his shoes then I would run Cue Card in the King George and aim Thistlecrack at the novice chase. They can then sort things out between themselves at Cheltenham in March.

Looking to today’s action at Sandown I was keen to see the Neptune Novices’ Hurdle as this was a race that many years ago I sponsored in the name of the Dark Horses Annual.

I thought that Ballyandy would relish the step up to 2m 4f given his pedigree – by Kayf Tara out of a mare by Karinga Bay – but despite running well he was beaten close home by Messire Des Obeaux, with Cultivator a close third. I don’t think many people would have predicted that Ballyandy, winner of the Champion Bumper at Cheltenham, would be 0 from 3 in his first three starts over hurdles. 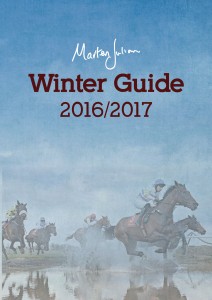