This morning it was announced that Ben White would be replacing the injured Trent Alexander-Arnold in England’s 26 man squad.

He’s got fortunate with this opportunity in a sense. The injury to Joe Gomez of Liverpool, drops in form from both Eric Dier and Michael Keane, injury doubt over Harry Maguire and of course the injury to Trent Alexander-Arnold, which is the reason he’s in the final 26.

He has the modern centre-back attributes with his ability to bring the ball out from the back and step into midfield before playing a positive pass. But he’s got that aggression and desire to stop attackers which tells you he loves defending, a bit of a throw-back when you look at some centre-backs in the Premier League nowadays. This blend of calmness and ability on the ball along with a real desire to defend makes him stand out when compared to other centre-backs and will help fans connect with him, as he always gives his all.

As well as his primary position of centre-back, White can operate in defensive midfield and right-back, meaning he offers a different option and cover in three positions. He can perform well in all three positions because of his ability to read the game, time and execute tackles, decent pace and desire to defend. These attributes also mean he’s comfortable in one on one scenarios both centrally and out wide. This versatility may be another reason why he made the squad over the likes of James Ward-Prowse, Ben Godfrey and Jesse Lingard.

I don’t know how much Gareth Southgate will play him in the tournament, but if Southgate wants to go with a back-four I’d trust White more than Tyrone Mings or Conor Coady to partner, I’d presume, John Stones. Despite White having not played a second of competitive football for England, with both of his caps coming in friendlies, I think he looks more settled and composed then the mentioned centre-backs on the international stage.

I rate both Mings and Coady, but I don’t trust either in a back-four. Conor Coady could play as a sweeper in the middle of a three and Tyrone Mings would slot in nicely on the left of a three, a position I think would help eradicate a lot of the errors from his game because he’ll know he has cover from the other two centre-backs should he feel the need to cover a wing-back in the wide areas.

Do I think Ben White should play in this tournament? It really does depend on Harry Maguire’s injury. If England are playing a top team with tricky wingers and a target man in the middle, France or Portugal come to into mind, I think White could slot into a three and you could move Kyle Walker or Reece James to right wing-back instead of the more attack-minded Trippier.

I personally think he’s going for the experience and to offer cover in three positions, with a possible role to play from the bench. He’s a talented centre-back and one who could definitely push for a Starting XI spot in the England team over the next few years and fully deserves the chance to be part of the EUROs squad with his development with both Leeds United and Brighton and Hove Albion. 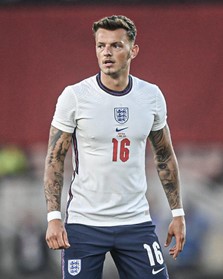