View basket “Not Minding That It Hurts” has been added to your basket.
Offer!

The new jumps season is fast approaching and that means there will be a host of potential future stars about to break on to the scene, many of them coming from the point-to-point field.

The vast majority of racing enthusiasts won’t see these horses until they appear on the track, but this book will give readers an edge before they make their debuts.

Jodie provides an in-depth analysis of about 80 horses, focusing on their physical appearance, character and likely optimum racing conditions.

In previous years Jodie has spotted and written about the early potential of many future stars including – most notably last season – Santini, Blackbow, Posh Trish, On The Blind Side, Carefully Selected and Brewin’Upastorm.

Subscribers to the Weekend Card will also receive regular updates on the horses I follow throughout the season.

• An in-depth analysis of 77 lightly raced horses.
• Of those names there are a hand-picked 20 with ‘Star Potential’ which Jodie believes will do especially well for their new connections.
• A mare which is being aimed at Cheltenham’s November Listed Bumper.
• An ex-Tom Lacey inmate who is described as ‘top drawer’.
• A Stowaway gelding who took three furlongs to pull up after winning impressively.
• A Willie Mullins’ trained gelding with the potential to develop into a leading bumper performer.

“I could not be happier with how well this book has done. I knew when I first had the idea to write about point-to-point horses I may unearth some hidden gems, but I am staggered by the fantastic results so far. The endless hours of researching, watching replays and seeing horses in their yards has certainly paid off, and there are still plenty more exciting names to make their debuts. In fact, I think, potentially, the best ones are yet to come!” February 2019

Cover photography provided by Susie Cahill. She is on Twitter using the handle @GirloftheSummer

Hi Jodie. At the end of a really rough week it was great to receive a shiny package through the post! Really impressed with the layout and insightful comments – you must be very proud! You’ve put all the hard work in and now I’m sure it will pay dividends over the coming season. A Rogers (Twitter)

Received my book this morning you should be very proud. Do you know where I can add the horses from the English points to my tracker? can’t do it on Irish racing tracker or Timeform. Dean (Twitter)

Looking forward to studying this fantastic publication over the next few days it’s very well presented with some very interesting names to follow over the coming months. Excellent work. Top Class. I Mackie (Twitter)

Wow just received my copy and in one of the glitzy envelopes. Now the hard work starts of deciding which horses I am going to follow for the season. Thanks. D Vickers (Twitter)

It’s here too! I look forward to diving in. Congratulations, it looks terrific. S Nott (Twitter)

I only started reading it yesterday as I was away in Scotland at the Dunhill golf till Saturday evening. It is a quite brilliant piece of work. The detail about each horse is quite something and the research you have done is second to none. But as I’ve said before all the work done by Team Julian is of the highest standard. M McHugh (Email) 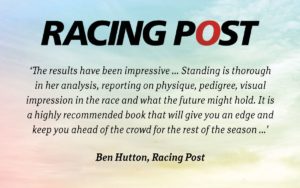